Kuils River (Afrikaans: Kuilsrivier) is a town in the Western Cape, South Africa, 25 km east of Cape Town CBD at the gateway of the Cape Winelands. It is also the name of the main tributary of the Eerste River. Originally named De Boss, Kuils River was a refreshment post of the Dutch East India Company in 1680, also known as de Kuijlen. In 1700 the farm Leeuwenhof and other parts of de Kuijlen were sold to Olof Bergh. It started to develop into a village. A church was founded by Rhenish Missionary Society in 1843 in Sarepta. A proper road was built in 1845, a railway station in 1862 and a school in 1898. In 1898 stands were sold for residential development. On 4 December 1950 it attained municipal status.

The town takes its name from the nearby river, in which there are many pools, or kuile (Dutch for dams). Kuils River is a level two administrative region, and is close to Stellenbosch's wine routes. It is located near the intersection of the M12 and the R102. Kuils River is home to the Jan du Toit and Alta Kriel Schools for mentally handicapped children. and is the birthplace of Herman Charles Bosman (3 February 1905); journalist, poet and author. He is regarded as one of South Africa's greatest writers (in English). The industrial area Blackheath is in Kuils River. Kuils River was a municipality from 1950 to 1996. The town council assumed a coat of arms, designed by Ivan Mitford-Barberton, in 1955 and registered it with the Cape Provincial Administration in January 1956. The shield was divided into three horizontal sections: a running buck on a silver background, a golden yoke on a red background, and four silver and blue stripes with wavy edges. The crest was a bull's head, and the motto Via trita via tuta. 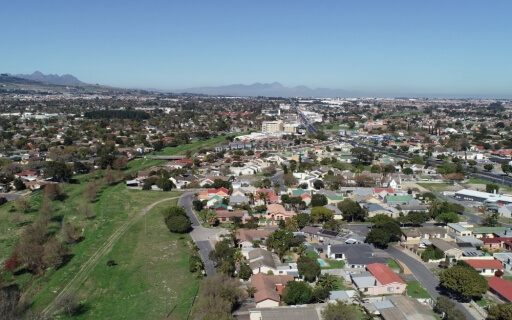