The "garden city" suburb of Pinelands is a middle class suburb located on the edge of the southern suburbs of Cape Town, South Africa, neighbouring the suburb of Thornton, and is known for its large thatched houses and green spaces. The suburb is primarily residential and is often praised for its peacefulness and abundance of trees. Pinelands is one of the few areas in Cape Town in which sale of alcohol to the public is prohibited, but some clubs have private liquor licenses. It is a popular place for senior citizens to retire to. While there are several retirement homes in the suburb, younger people are increasingly moving in.

The main road is called Forest Drive and the suburb contains two small shopping centres, namely Howard Centre (named after Ebenezer Howard who led the garden city movement) and Central Square. Dutch Reformed, Anglican, Presbyterian, Methodist and Catholic (Society of St. Pius X) churches are located near to Central Square, while Baptist, Church of England in South Africa and mainstream Catholic churches are located elsewhere in the suburb. Pinelands is served by two Metrorail railway stations: Pinelands station on the western edge of the suburb and Mutual station on the northern edge. The suburb is bisected from the north east to the south west by the Elsieskraal River, which has flowed through a large concrete drainage canal since the 1970s. Elsieskraal River also flows through the neighbouring suburb of Thornton, which is a similar residential suburb with an abundance of trees.

The layout of Pinelands is based on the then revolutionary Garden Cities methodology of town planning by the British town-planner, Sir Ebenezer Howard. It was originally a Victorian era farm named Uitvlugt that had thousands of pine trees planted in it, and was later deemed an economic failure by the Department of Forestry. In the aftermath of the outbreak of the bubonic plague in Cape Town in February 1901, the colonial health authorities invoked Public Health Act of 1897 and quickly established a location in Uitvlugt forest station (modern day Pinelands).

Black Africans living in District Six were rounded up under armed guard and taken to the location of Uitvlugt. This area was initially established primarily to quarantine Black Africans who were forcibly relocated after the outbreak of the disease, furthering efforts of the government at the time to push Black and Coloured communities to the outskirts of the city. This marked the beginning of forced removals in Cape Town in the twentieth century. Almost 22 years later, the land was then granted to "The Garden Cities Trust" and the founding Deed of Trust was signed in 1919. One of the first members of the trust, Richard Stuttaford (head of the department store Stuttafords), made a 10,000 Pound gift donation to serve as capital, and a loan of 15,000 Pound from the government was invested in Pinelands. The trust brought in an overseas expert, Albert John Thompson, in 1920 to design the area.

The first (thatched) house in Pinelands to be occupied was 3 Mead Way and was built in February 1922. The house and entire street, including The Mead were declared a national monument in 1983. The original township area is currently a proposed heritage area. Pinelands converted to a municipality in 1948 and in 1996 merged into the City of Cape Town metropolitan municipality. The old Pinelands Town Council offices now accommodate the Pinelands Subcouncil. 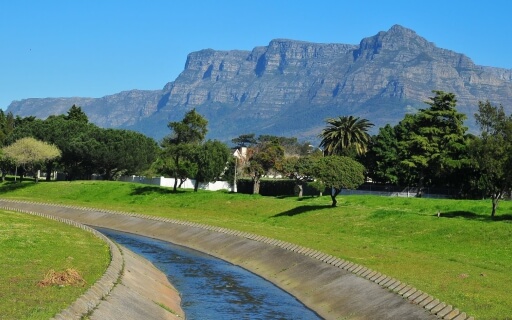