Muizenberg (Dutch for "mice mountain") is a beach-side town in the Western Cape, South Africa. It is situated where the shore of the Cape Peninsula curves round to the east on the False Bay coast. It is considered to be the main surfing spot in Cape Town and is currently home to a surfing community, centered on the popular 'Surfer's Corner'.

Muizenberg was apparently named after Wynand Willem Muijs who commanded a small outpost in the area in 1743. The Battle of Muizenberg was a small but significant military affair that began on 7 August 1795 and ended three months later with the (first) British occupation of the Cape. Thus began the period (briefly interrupted from 1803 to 1806) of British control of the Cape, and subsequently much of Southern Africa. The historical remnant of the Battle of Muizenberg is a site on the hillside overlooking False Bay that holds the remains of a defensive fort started by the Dutch in 1795 and expanded by the British from 1796 onwards. Cannons from that era are mounted at "Het Posthuys", the Muizenberg Park and on the station platform. The railway from Cape Town, which for twenty years stopped at Wynberg, was extended to Muizenberg in 1882.

Muizenberg started as a place for holiday homes for the rich after the discovery of gold in the Witwatersrand in 1886. Muizenberg Municipality was established in 1895. It merged with Kalk Bay in 1897. In 1910 a library opened next to the Natale Labia, and a year later a post office opened. In 1911 the first pavilion, a wooden one, was built. The famous architect, Sir Herbert Baker, designed his house "Sand Hills" on Atlantic Road, was the architect for "Vergenoegd" further along the same road, and designed "Coel an Mar" on Main Rd. Many of the buildings in Muizenberg date from the resort town's heyday and are built in the art deco style.

At its peak the Muizenberg beachfront attracted masses of holiday-makers and the beach in front of the pavilion earned the name "The Snake Pit". It boasted a large Jewish population that attended the synagogue in Camp Rd. The community is celebrated in a book called "The Stetl by the Sea". Rhodes' Cottage is a small house on the seafront that Cecil Rhodes bought as a holiday cottage and this was where he died in 1902. The house is preserved as a museum dedicated to Rhodes' life and is open to the public. Het Posthuys is one of the oldest buildings in South Africa, originally erected in February 1673: a year before the Castle in Cape Town was occupied. It was built by the Dutch East India Company (Vereenigde Oost-Indische Compagnie or VOC), originally as a three-roomed signal station, and used as a military observation post, and subsequently used as a toll-house to levy a tax on farmers passing by to sell their produce to ships lying in Simon's Bay. One of the early postholders was Sergeant Muys (meaning "mouse"), from whom Muizenberg (formerly Muysenbergh and Muys Zijn Bergh (Muys' mountain) before that) gets its name. After a varied career as a police station, stables, brothel, hotel and private house the building was identified for what it was in the 1980s and restored with funds from Anglo American Corporation. The house is cared for by the Muizenberg Historical Conservation Society and contains a small collection of photos and items of interest relating to early days in Muizenberg. It is open to the public. The Muizenberg Battle site flanks the home of the first Italian Envoy Extraordinary and Minister Plenipotentiary to South Africa, Prince Natale Labia. Originally called "The Fort" after the site of the battle, it now bears the name Casa Labia and is a restaurant, conference centre and music venue. The house was built by skilled Italian artisans and houses part of the Labia family's extensive art collection. Behind Casa Labia lies the grave site of Abe Bailey, one of South Africa's early and important mine magnates. The graveyard is maintained by the Muizenberg Historical Conservation Society. One of the few houses on the sea side of the railway line, is the thatched cottage owned by Bailey and called Bailey's Cottage. This is owned by the South African Navy. There have been three pavilions built in Muizenberg - the first was a wooden one built in 1911. The next had bathing cubicles, a tearoom, and a 900-seat theatre, built in 1929. This was demolished in 1970, and a third one, still standing, was built. Muizenberg has a fine, long beach that in effect stretches all the way round the top of False Bay to the Strand, a distance of over 20 km. False Bay, known for its population of White Sharks, also has a shark watch service that operates from Muizenberg, signaling alerts when sharks come in proximity of bathers at the main beach and surfers at Surfer's Corner. Above Muizenberg there is a line of steep cliffs that is very popular as a venue for rock climbing. However, certain parts of the cliff are off-limits to climbers when birds nest on the ledges. The Zandvlei estuary enters the ocean in Muizenberg. The estuary is one of the most important estuaries for fish spawning on the coastline and is home to the Imperial Yacht Club and Peninsula Canoe Club. 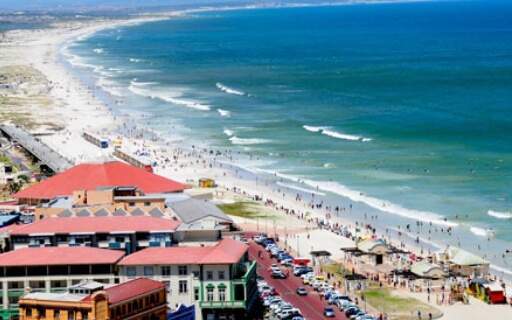 Below are some articles about Muizenberg