Hout Bay (Afrikaans: Houtbaai, meaning "Wood Bay") is a seaside suburb of Cape Town in the Western Cape province of South Africa. It is situated in a valley on the Atlantic seaboard of the Cape Peninsula, twenty kilometres south of the Central Business District.

The name "Hout Bay" can refer to the suburb, the bay on which it is situated, or the entire valley. The area was originally made up of two farms, which were slowly subdivided to make way for urban expansion. While still maintaining its rural atmosphere, the area of Hout Bay has more than 5,960 residences inhabited by a population of at least 17,900 people (as of 2011). From remains found in a cave, we know that people lived in this cave between 100 AD and 500 AD. These people were known as the Late Stone Age people. They had no metal tools or weapons and used stone to make whatever implements they needed. They were gatherers of wild plants, shellfish and the seabirds and animals that were washed ashore. They also hunted and fished using hooks fashioned from bones and nets made from fibrous plants and the skins of animals. The Khoi-Khoi and Bushmen were descendants of the late Stone Age people. They were called Khoi-Khoi because of the clicking sounds contained within their language. The Khoi-Khoi were also called Strandlopers because they gathered food from the beaches. Some people also referred to them as Kaapmans, Men from the Cape. The Khoikhoi were gatherers, hunters and herders, which meant that apart from gathering and hunting for food, they also possessed large herds of cattle and sheep. They lived in huts made of restio mats tied to a Beehive shape frame made of pliable poles. The Khoi often set up camp in Hout Bay. The names Hotnotshuisie and Oudekraal originated from the days when the Khoi camped in these places. The Khoi traded with the early voyagers from Europe who were on their way to the East and had stopped at the Cape in order to get fresh food and water. The Khoi bartered with these early sailors exchanging cattle and sheep for small pieces of copper, brass and tin.

The first written account of Hout Bay dates to 1607 when John Chapman, masters mate on the English boat, the "Consent" which was becalmed at the entrance to the Bay, was sent in the ship's pinnace at dusk on a chancy venture because Hout Bay was unknown wild country and the time was late afternoon which would make it difficult for him to find the Consent in the darkness. Recorded in the Rutter (Logbook) by the pilot, John Davis: "Chapman's Chaunce hath in latitude 34-10 and is a harbour which Leith within the south-west point under a little hill like charring cross (a sculptured memorial of a cross on an ornamental mounting in London) close hanging by the seaside of the S.S.W side of the land " Chapmans Chaunce was the first name given to Hout Bay and it was also the first English name to appear on the maps of Southern Africa. In 1614 an English sailor records having taken wood from the forest of Hout Bay in order to mend his ship. When the Dutch established a colony in Table Bay in 1652, a great quantity of good timber was required for construction, shipbuilding and other purposes. There was no large forest in the immediate vicinity of the settlement, mainly because the rainfall was not high enough. It was soon apparent that the colonists would be able to fell wood they needed in the wetter valley that lay on the other side of a low pass (now called Constantia Nek) between the southern end of Table Mountain and Constantiaberg.

Van Riebeeck described the forest of Hout Bay as being the finest in the world. It was Van Riebeeck who gave Hout Bay its present name. In 1652 on 22 November Van Riebeeck wrote in his journal about T' Houtbaaitjen. Since then it has been known as Hout Bay. In 1662, the year when Jan Van Riebeeck left the Cape, the Boscheuwel road was extended from Kirstenbosch in a rough track over Constantia Nek to Hout Bay. In 1668 the first permit to cut and saw wood in the Hout Bay forest was granted. In 1677 the first agreement to rent land for farming purposes was signed. In 1681 two farms were established Ruyteplatts and Kronendal. In 1781 the French-built three forts at Hout Bay. These were part of a line of forts known as the French lines that were built in order to protect the Cape from falling into the hands of the English. The west fort at the harbour dates from this time. In the latter half of the 19th century, the farms Moddergat, Nooitgedacht, Oakhurst and Uitkyk were established.

In 1873, manganese was discovered in the Constantiaberg. In 1909 to 1911 manganese was mined in Hout Bay. Reminders of these activities are the ruins of the manganese ore jetty and the old mine workings up the mountain. In 1880, Crisp Arnold set up fishing sheds and started curing snoek for export to Mauritius. In 1895 Walter Gurney built the first church in Hout Bay. It still stands today and is known as St Peter's the Fisherman. The first school in Hout Bay was started in this church. In 1904 Hout Bay's first crawfish canning factory was established in the wreck of an old sailing ship, The R Morrow that stood where the present South African Sea Products factory is today. For almost 10 years the factory operated successfully exporting canned crawfish overseas and providing work for the local inhabitants. On 31 July 1914 a leak in the acetylene gas supply caused an explosion which blew up the canning factory, killing 7 people including the owner Mr. Lucien Plessis.

German immigrant and farmer, Jacob Trautmann, established the first fishing village here in 1867. The fishing industry expanded substantially in the 1930s when fish became a popular item on menus and improved facilities for transporting fish inland were created. The Trautmann family improved their fishing boats and built more sheds on the beach for processing the fish. They owned Trans Africa Fisheries. The Trautmann brothers introduced the valuable frozen rock lobster tail export business and the Dorman family, who like the Trautmanns, had originally bought land in the 19th century for farming purposes became more involved in the fishing industry. Duikersklip and Chapman's Peak Fisheries were two companies owned by the Dormans. Today Chapman's Peak fisheries have expanded to incorporate a fish importing business as well as retailing local catches. Mariners Wharf, South Africa's fish emporium, was opened 1984. Harbour facilities have improved steadily over the years. In 1937 the South Breakwater was built and in 1968 the North Breakwater was added. The post-war fishing factories spread everywhere and at Hout Bay, the South African Sea Products Company was established. 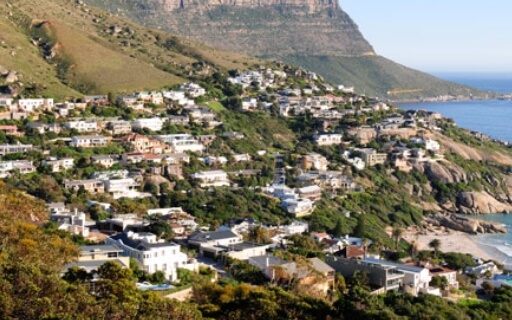 Below are some articles about Hout Bay