Fish Hoek (Afrikaans: Vishoek, meaning either Fish Corner or Fish Glen) is a coastal town at the eastern end of the Fish Hoek Valley on the False Bay side of the Cape Peninsula in the Western Cape, South Africa. Previously a separate municipality, Fish Hoek is now part of the City of Cape Town. As a coastal suburb of Cape Town, Fish Hoek is popular as a residence for commuters, retired people and holidaymakers alike.

The traditional industries of 'trek' fishing and angling coexist with the leisure pursuits of surfing, although nearby Kommetjie is usually favoured, sailing and sunbathing. There is an active lifeguard community who utilise the beach and bay for training. Fish Hoek, Vissers Baay or Visch Hoek appears on the earliest maps of the Cape. Diplomat Edmund Roberts visited Fish Hoek in 1833. He described it as a "poor village" with a whaling industry.

The first grant of Crown land in Fish Hoek was granted to Andries Bruins in 1818. The land was sold several times before being bought by Hester Sophia de Kock in 1883. She was then a spinster of 51 years old. In 1901, late in life, she married a local farmer, one Jacob Isaac de Villiers, who came to live with her on the farm. Although she farmed wheat and vegetables, she started providing accommodation for people who wanted to stay in Fish Hoek, and so became the first local tourist entrepreneur. Having realized that Fish Hoek was becoming popular, she left instructions in her will that the farm was to be surveyed and the land sold as building plots. After the deaths of Hester and Jacob, the land was sold off, the first sale taking place in 1918. The oldest house on the bay, now named Uitkyk, was bought as a fisherman's cottage in 1918 by the Mossop family of Mossop Leathers, and is still in the Mossop family. There had been a building on that site since the 1690s; a poshuis or post house and a whaling station office is all that is known of its history. This was the beginning of the town of Fish Hoek.

Initially people built holiday cottages, but as there was a good train service to Cape Town a more permanent community soon arose. By 1940 it was big enough to be declared a municipality and was administered by the Town Council until 1996. Hester and Isaac de Villiers, with other members of their family, are buried in the small graveyard next to the NG Kerk (Dutch Reformed Church) in Kommetjie Road. The farmhouse on the site of the present Homestead Naval Mess near the railway crossing became a hotel. The original building subsequently burned down in 1947. After being part of the transitional South Peninsula Municipality from 1996 to 2000, Fish Hoek now falls under the City of Cape Town.

Today Fish Hoek is regarded as a suburb of greater Cape Town and lies on the railway line from the central business district of that city to Simon's Town in the south. Until recently, Fish Hoek was a "dry" area - one of the conditions placed by the owner who gave the land for development was that there be no alcohol sold there. Nowadays, alcohol is available in restaurants and bars, but only recently have there been bottle stores allowed. Fish Hoek is also the site of the unfavorable protester Craig Peiser who ripped off a journalists mask during lockdown due to the Covid 19. Peiser later went to a physciatric hospital for mental evaluation and to court. 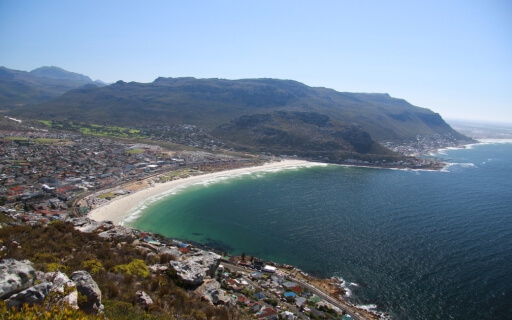