Worcester is a town in the Western Cape, South Africa. It is located 120 kilometres north-east of Cape Town on the N1 highway north to Johannesburg. Being the largest town in the Western Cape's interior region, it serves as the administrative capital of the Breede Valley Local Municipality and as regional headquarters for most central and Provincial Government Departments. The town also serves as the hub of the Western Cape's interior commercial, distribution and retail activity with a shopping mall, well developed central business district and infrastructure. Worcester is located at an elevation of 220 metres and can be reached by road either travelling on the N1 highway through the Huguenot Tunnel or by driving through spectacular mountain passes. From Cape Town Du Toitskloof, from Wellington Bainskloof, from Malmesbury, Western Cape Nieuwekloof, from Ceres Mitchells, from Robertson Goree, from Hermanus Rooihoogte and from Johannesburg Hex River, with vistas over the Hex River Valley.

Geographically, the district is delimited mainly by mountains; to the southwest lies the massive Stettyns mountain range with an annual rainfall in excess of 2000 mm. To the west lie the Du Toitskloof Mountains and northwest lies the Slanghoek, Little Drakenstein, Elandskloof and Lemiet mountain ranges. To the north rises the Hex River Mountains which include the towering peaks of Chavonness, Brandwacht, Fonteintjiesberg and Audensberg. Northeast of the town the colourful Keerom Mountain runs into the Langeberg range. Worcester and its surroundings form part of the Breede River catchment area, which is fed by a number of smaller rivers supplemented by the run-off from the winter snows in the mountains. The district also includes the Hex River Valley. Worcester also consists of a township named Zwelethemba. In 1985, students protested over Afrikaans being a dominant language at school.

Riots broke out and several students were shot by police in Robertson Road. A student named Nkosana Nation Bahumi was killed due to the protests. In the early days of the Cape's history the main road through the great mountain barrier which stretches northwards from the Hottentots-Holland, Wemmershoek and Slanghoek mountains to the Groot Winterhoek mountains, lay through the Roodezand Pass into the valley of Tulbagh. From here the road gave access in the south-east to "the original great rift valley of Africa" as Jan Smuts once described the Breede River Valley. Worcester district is as old as hunting grounds and cattle runs go in the Cape, but new as a settled area. Before 1700, the area now known as the Breede River Valley was a hunter's paradise, teeming with game and wild birds. The main source of income, especially the sale of elephant tusks came from hunting licenses issued by the Dutch East India Company. By 1709 European farmers were given grazing rights in the area "over de Breede Rivier." In 1714 the first quitrent farms were released. Settlement in most cases was not on a permanent basis and "Hartebees huisies" were erected. When European settlers first arrived at the later Cape Colony, the Breede River Valley was inhabited by San hunter/gatherers and Khoi livestock farmers. The Gainou, Korannas and Afrikaner tribes traded livestock with the settlers. With the European settlers came the smallpox virus, that would turn into an epidemic for the Khoi people and by 1713 would take its toll on their existence as a people. European settlement took place at Waay Hoek, Bossiesveld, Kleinbosch, Slanghoek, Brandvalley, Vendutiekraal, Rooye Wal and Doornrivier. The first farms in the Hex River Valley were Kloppersbosch and De Buffelskraal, dating from 1731. With the European settlers came their slaves and eventually so-called free Khoi, who would settle on the farms as labourers. With the Cape Colony interior expanding with the settlement of an increasing number of European settlers, Lord Charles Somerset instructed Magistrate Fischer of Tulbagh, to find a location to establish a new deputy magisterial seat during 1818. Fischer duly reported that the two quitrent farms, De Lange Rug and Roodedraai, be bought for this purpose. On 9 January 1819 the Colonial surveyors, Tulleken and Hertzog mapped the two farms and on 4 November, the first official advertisement for the sale of plots was issued. On 28 February 1820, the official date of the establishment of Worcester, 89 of the proclaimed 144 plots were sold. Fischer also reported that "this place becomes more important when the new road over the Franschhoek Mountains will be completed." The African Rifles Regiment started construction of this road in 1819. A winter storm in 1822 caused damage to the town of Tulbagh. Captain Charles Trappes recommended to Somerset that the magisterial seat be moved to the new town. By 1830, 329 farms were cultivated in the district and by 1832 the town of Worcester was becoming a frontier town with the Market Square being used for stock sales. Many a fine animal changed ownership in the days when Worcester was a jumping-off spot for the "togryers" of the 19th century. By the 1850s the necessity for the formation of a hamlet west of the Breede River had become clear; the ward was cut off from Worcester during the rainy season when the river burst it banks regularly. The farm Aan-de-Smalblaar was transported to Johannes Petrus Jordaan on 23 July 1858. Jan Jordaan divided a portion of the farm into 57 residential plots and these were sold at a Public Auction on 11 June 1859. The hamlet of Rawsonville was named for William Rawson, the Cape Colonial Secretary. German settlers employed as "tagloners" on the surrounding farms from 1860 onwards, would soon use the abundance of fertile soil, water and their skilled labour to see the area evolve from livestock farming to cultivated land, orchards and vineyards. By 1865 the production from the flourishing vineyards compared favourably with the Stellenbosch and Paarl valleys. Much of the crop was dried for raisins, and this continued to be an important aspect of the local industry into the 20th century. The decline in the demand for raisins after the Second World War persuaded most of the farmers to convert to wine-grape growing: and in response to this change an extensive network of co-operative wineries sprang up.

Today the Breede River Valley is the largest wine-producing region in South Africa, contributing almost 25% of the country's viticultural output. The Olof Bergh Solera Brandy Cellar and the KWV Brandy Cellar form part of the South African Brandy Route and 33 wineries produce and bottle in the Worcester area. The first export grapes planted in the Hex River Valley dates from 1875. Today the Hex River Valley produces more than 17 million cartons of table grapes per annum. In the dryer southern regions of the valley, Olive production have also been added in recent years. Central to this agricultural production, is the Greater Brandvlei Dam, with a capacity of 342 million cubic litres. The dam was completed in 1936, fully extended by 1987 and provides water to various irrigation schemes in the valley. Lord Charles Somerset named the new town for his eldest brother, the Marquis of Worcester and by 1840, 132 of the original 144 plots were sold. Captain Charles Trappes was responsible for the planning of the town. A dubious character in some ways, Trappes, however, was far in advance of his time when he laid out the wide streets and town blocks with vision and a high regard for squares. Trappes made the early builders put the houses close to the street and soon these builders would develop their own style of gables. An early visitor, James Backhouse found 1300 people living in the rising town in 1840. According to the 1844 Cape Almanac, William Watson ran one of the best hotels in the country and Bishop Gray said in 1845 that the houses were a great distance from each other.

The Worcester District Council was proclaimed on 20 December 1855. The boundaries were northwest - Kleinberg, northeast - Bloutoring, southeast - Mowers Heights, southwest - Roodehoogte and west - Du Toitskloof Mountains. Sub division of the original plots dates back to the 1860s when the town experienced its first economic boom. By the 1890s, when there was a downturn in economic fortune the population grew at a considerable rate, as landless people moved to the town. Small industry, business and residence still operated within the original boundaries of the town. During the 1890s Worcester's community would also evolve into an uptown section for rich and middle-class people and a downtown section for so-called poor Whites and Coloured people. Even the Dutch Reformed Congregation would censure European and Coloured people living under desegregated circumstances. Worcester received Municipal status on 30 September 1895. A Town Council, consisting of 8 members governed the town. When Black Africans returned to Worcester at the end of the First World War, they were mainly employed as cheap labour for new construction programs springing up around town. By 1936, 1271 Black African people were living in the Worcester district. At the end of the Second World War, housing in Worcester was at a premium and Worcester had a squatter camp at Parkersdam. It was also during these years that Worcester started to expand with new residential areas and an industrial area. The Apartheid regime responded by total segregation of the different communities. In the Coloured area 1350 sub-economic dwellings and 584 economic dwellings were built in Esselen Park Uitbreiding (extension) also known as "ICE CHASSIS", Roodewal and Riverview, in addition, 230 plots were sold in Esselen Park for the erection of dwellings by purchasers. Mostly Indian traders were forced to move their businesses from the declared White areas and resettle in the downtown business district of Durban Street. The Zweletemba township, to the southeast of the town, was awarded 524 sub-economic, 300 economic dwellings and two hostel schemes of 1274 units for single persons. Due to the policy of Apartheid, these people were not considered to be permanent residents and it was only after the abolishment of influx control in 1986 that the township population really exploded. A further 67 sub-economic and 137 economic dwellings were developed in the White Areas and affluent residential areas towards the north of the town. The early years of Apartheid would also see the old town being transformed into a central business district. Most of the character and charm of the old buildings was lost as the then government and society replaced these buildings with new administrative and retail buildings, based on "New-World" consumerism. Grand Apartheid would leave the community divided and in segregated living areas. A separate Management Committee for Coloured People was introduced on 2 April 1965. With the coming of democracy to South Africa, Worcester now forms part of the Breede Valley Local Municipality. 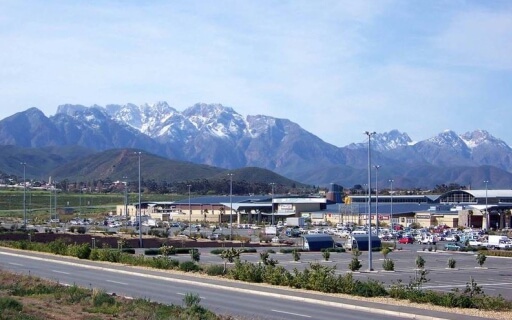