Wellington is a town in the Western Cape Winelands, a 45-minute drive from Cape Town, in South Africa with a population of approximately 62,000. Wellington's economy is centered on agriculture such as wine, table grapes, deciduous fruit, and a brandy industry.

The town is located 75 km north-east of Cape Town, reached by the N1 motorway and R44. Due to the growth of the Flakkaland and Mbekweni township south of the town, it now forms a de facto urban unit with Paarl, just 10 km to the south. Wellington now officially falls under the Drakenstein Local Municipality, which also covers Saron and Paarl.

Wellington is situated at the foot of the Groenberg on the banks of the Kromme Rivier (Dutch for Bend River) and forms the center of the Cape Winelands with its picturesque environment and numerous wineries. The town is at the base of one of the oldest mountain passes in South Africa, Bain's Kloof Pass, built by master road-builder Andrew Geddes Bain. The town is the home of the Boland Rugby Union and the professional rugby team the Boland Kavaliers. The town is also an academic centre, with Cape Peninsula University of Technology, Timothy Ministry Training, Bible Media, Huguenot High School, Weltevrede Senior Secondary School, and Bergriver Senior Secondary School all falling within the town.

Originally known as Limiet Valley (border or frontier valley), the area became known as Val du Charron or Wagenmakersvallei (Valley of the Wagonmaker) toward the end of the seventeenth century when the French Huguenots settled there. After the formal establishment of the town in 1840, the name was changed to Wellington in honour of the Arthur Wellesley, 1st Duke of Wellington, renowned soldier and conqueror of Napoleon at the Battle of Waterloo, as suggested by Sir George Napier.

Established in 1886, the James Sedgewick Distillery is located in Wellington, and produces the Three Ships range of whiskies, as well as the single grain Bain's Cape Mountain Whisky. 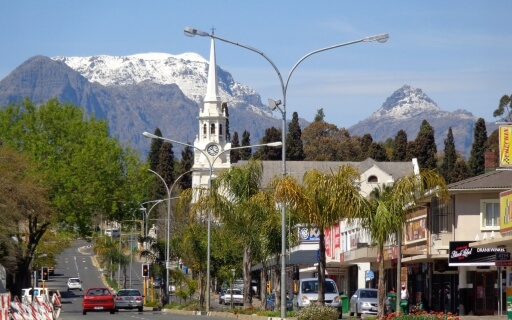