Somerset West (Afrikaans: Somerset-Wes) is a town in the Western Cape, South Africa. Organisationally and administratively it is included in the City of Cape Town metropolitan municipality as a suburb of the Helderberg region (formerly called Hottentots Holland).

A cattle post was established here by Dutch soldiers in 1672. A town developed around the Lourens River (originally "Tweederivier", which means "Second River"; "Eersterivier", meaning "First River" passes through Stellenbosch, some 16 km (9.9 mi) to the north) and the farm of Vergelegen (Dutch: "remotely situated"), an 18th-century farmhouse built in the historic Cape Dutch style by Willem Adriaan van der Stel, governor of the Cape and son of Simon van der Stel, who gave his name to the nearby town of Stellenbosch. Willem Adriaan was later sent back to Holland after being charged with corruption and cruelty towards local Dutch farmers. The farm is now owned by a subsidiary of the large mining company Anglo American, who have restored the farmhouse to its original magnificence and continue to produce some of South Africa's best wines there. The farm is open to tourists. Somerset West was founded in 1822 on part of the historic farm, Vergelegen.

The town was named Somerset after an English governor of the Cape Colony during the 1800s, Lord Charles Henry Somerset, with the suffix 'West' being added after 1825 to differentiate it from Somerset East, another South African town in the Eastern Cape.

In the 1830s, Sir Lowry's Pass, named after later governor Sir Lowry Cole, was constructed to link the town with outposts further east over the Hottentots-Holland mountains. In the 1960s, the AECI factory between Somerset West and Strand was the second largest dynamite factory in the world.

Somerset West lies in the Helderberg Basin, surrounded by an amphitheatre of mountains, between the Cape Winelands and False Bay. Every December, the town has a fairly decorative display of Christmas lights erected atop the street lights of the Main Road. The Helderberg Lights Festival (aka the Strawberry Festival), a flea market and parade, normally complements these lights. The area also has its own community radio station, Radio Helderberg, broadcasting community notices and playing adult orientated pop music.

The Helderberg Nature Reserve, a 363 hectare natural wildlife preserve opened in 1964, contains a wide variety of smaller fauna (buck, tortoises and other reptiles) and outstanding specimens of indigenous flora such as Protea and fynbos.

Somerset West contains a number of sporting facilities including several golf courses. The historic town of Stellenbosch is reachable via the R44 motorway (approx 18 km/11 mi away). The area between Somerset West and Stellenbosch also encompasses many vineyards and wineries (e.g. Rust-en-Vrede, Lourensford, Alto, J.P. Bredell) where visitors can sample and purchase wine. The oldest remaining vineyard in South Africa, Vergelegen, is situated on the outskirts of Somerset West.

In recent years many guest houses and B&Bs have opened up in Somerset West, since it is conveniently located for Cape Town (45 kilometres away on the N2 motorway), the beaches at the Strand and Gordon's Bay, as well as the Western Cape's numerous wine farms. 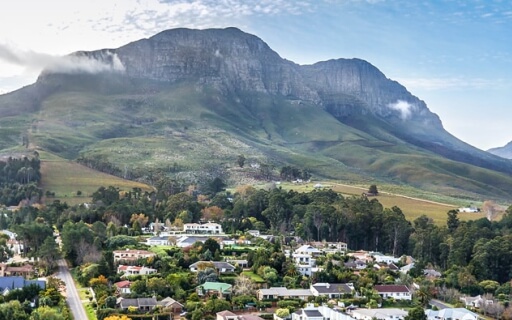 Below are some articles about Somerset West