Malmesbury is a town of approximately 36,000 inhabitants in the Western Cape province of South Africa, about 65 km north of Cape Town. The town is the largest in the Swartland ('black land') which took its name from the Renosterbos ('rhino bush'), an indigenous plant that turns black in the warm, dry summers. The area is especially known for its grain and wine cultivation as well as sheep and poultry farming.

Malmesbury was named after Sir Lowry Cole's father-in-law, the Earl of Malmesbury. Settlers were encouraged to make their homes here because of a tepid sulphur chloride mineral spring that was renowned for curing rheumatism. The first farms were allocated in 1703. When the fifth Dutch Reformed congregation in the Cape was established here, it became known as Zwartlands-kerk (Swartland Church) but was renamed Malmesbury in 1829. The town acquired municipal status in 1860. The town no longer attracts the ailing because this aspect was never developed by the local authority, and today a shopping centre is located on top of the site with only a decorative fountain marking the location of the original spring. 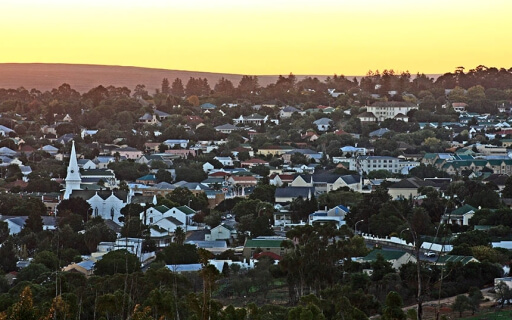