Barrydale is a village located on the border of the Overberg and Klein Karoo regions of the Western Cape Province in South Africa. Named after Joseph Barry, a well known merchant of the 19th century it is situated at the northern end of the Tradouw's pass which winds its way through the mountains to Swellendam.

Barrydale's history dates back to the early 18th century when farmers moved into the area looking for fertile arable land with water. The community built their church on a spot where the R62 and R324 roads meet. In the days before the church was built there were a number of nagmaal houses (houses where Holy Communion could be celebrated) and a school, but not much else.

The Dutch Reformed Community of Barrydale came into being in 1878 when land was purchased to build the church. As the farmers in the area were encouraged to plant vineyards and orchards, it was natural that a winery and distillery would eventually be built. In 1940 the Barrydale Kooperatiewe Wynkelder was formed and a distillery established giving rise to the wine industry in the area. Joseph Barry Brandy, produced locally, was voted best brandy in the world in 2003.

Over the years the village grew and eventually a municipality was established in 1921. Today there is an estimated population of +-4100 permanent residents. The population increases dramatically in the tourist season, with visitors drawn by arts and crafts displays including textiles, jewellery and African souvenirs. 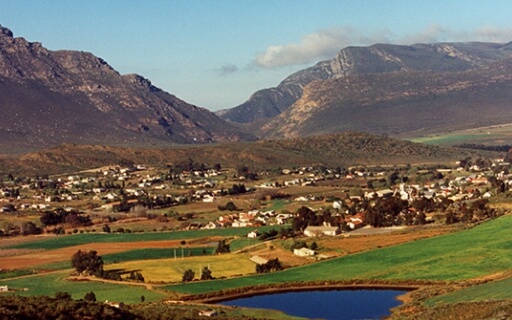