Arniston is a small seaside settlement on the coast of the Overberg region of South Africa, close to Cape Agulhas, the southernmost tip of Africa. Prior to the wreck of Arniston, it is also known as Waenhuiskrans, an Afrikaans name meaning literally "Wagon house cliff", after a local sea cave large enough to accommodate a wagon and a span of oxen.

In May 1815, a British East Indiaman, Arniston, was rounding the Cape in convoy on a journey to repatriate wounded British soldiers from Ceylon. The ship lacked a chronometer - an expensive instrument at the time - and consequently had to rely on other ships in the fleet to calculate the longitude of the group. After being separated from the convoy in heavy seas, the captain of Arniston was obliged to rely solely on dead reckoning to navigate. Thinking incorrectly that he was west of the Cape of Good Hope because of lack of headway, led to an incorrect assumption that Cape Agulhas was Cape Point. Consequently, Arniston was wrecked when her captain headed north for St Helena, operating on the incorrect belief the ship had already passed Cape Point, the master steered north for St Helena and ran the ship onto the rocks at Waenhuiskrans.

Only six of the 378 people on board survived the wrecking. The survivors spent several days on the beach before being discovered by a farmer's son. A memorial, a replica of which can be seen today, was erected on the beach by the wife of Colonel Giels, whose four unaccompanied children were lost in the tragedy. The memorial bears the following inscription: Erected by their disconsolate parents to the memory of Thomas, aged 13 years, William Noble, aged 10, Andrew, aged 8 and Alexander McGregor Murray, aged 7 (the four eldest sons of Lieut Colonel Andrew Giels of H.M. 73rd Regiment) who, with Lord and Lady Molesworth unfortunately perished in the Arniston Transport, wrecked on this shore on 3rd May, 1815. 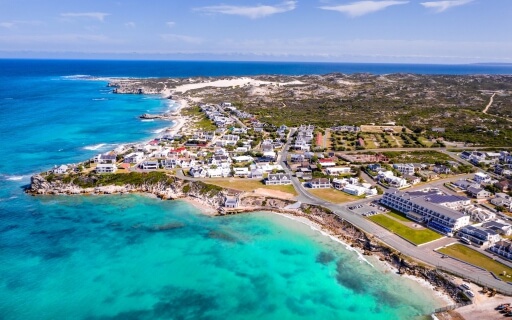