Hermanus (originally called Hermanuspietersfontein, but shortened in 1902 as the name was too long for the postal service), is a town on the southern coast of the Western Cape province of South Africa. It is known for Southern Right whale watching during the southern winter to spring seasons, and is a popular retirement location. Although the Southern Right whale is the most prolific species in the bay, it is not the only one that visits these shores. The whales can be seen from the cliffs all along the coast from as early as June and usually depart in early-December.

They were once hunted in the nearby town of Betty's Bay, but are now protected to ensure the survival of the species. The Old Harbour Museum contains several exhibitions that explain the whaling industry, and the De Wetshuis Photo Museum houses an exhibition of photos by T. D. Ravenscroft that depicts the history of Hermanus. The Whale Museum houses a skeleton of a whale and shows an audio-visual presentation of whales and dolphins twice daily.

Hermanus Pieters (ca.1778-1837) was a Dutch teacher who arrived in Cape Town in 1815. He was recruited by Dutch-speaking farmers who disliked that English was the only language used in all government schools. He settled in Caledon, but taught Dutch to farmers in a wide area around that town, including the Hemel-en-Aarde Valley. He often vacationed at the spring ("fontein") in present-day Hermanus, where he fished and grazed his sheep, the place eventually became known as "Hermanus Pieters se Fonteyn". He died before the village Hermanuspietersfontein existed. 65 years after his death the postmaster decided to abbreviate the name to Hermanus. The parents of Roger Bushell, leader of the "Great Escape" (the escape by Allied airmen from Stalag Luft III in World War II), retired in Hermanus after World War II, and are buried there. Bushell's name is one of those commemorated on the war memorial. 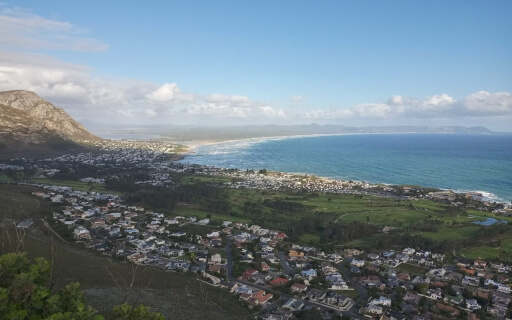 Below are some articles about Hermanus