Grabouw is a town located in the Western Cape province of South Africa. Grabouw is located some 65 km south-east of Cape Town, over Sir Lowry's Pass from Somerset West, along the N2 highway. The town is the commercial centre for the vast Elgin Valley, the largest single export fruit-producing area in Southern Africa, which extends between the Hottentots-Holland, Kogelberg, Groenland, and Houwhoek Mountains.

The town's population grows rapidly, with 44 593 people in 2019 from 21 593 as listed by the 2001 census. The original inhabitants of the area were the Khoikhoi pastoralists and the San hunter gatherers. The indigenous people of the region, the Chainouqua Khoi, inhabited a large area on both sides of the Hottentots Holland Mountains. They traded with early European settlers, but were later dispossessed from their lands by the Dutch colonists, who began to move into the area in the late 1600s and took the Chainouqua land for farming. Fortunately, the Khoikhoi names for some of the region's specific land-forms are recorded, and include Houtema, which is thought to have been the name for the Palmiet River, and Gantouw which was the name for Sir Lowry's Pass. The original Chairouqua name for the region where Grabouw is located is unfortunately not known. However a wide range of different names sprung up in colonial times. The town's location was first a stopping point for wagons on the route eastwards from Cape Town, along the route which the N2 highway now follows. The area was known at the time as "Koffiekraal".

Another colonial name for the area was "Groenland" ("Greenland" in Dutch) - a name given by early European settlers to various parts of the region, but which now applies only to the mountainous area to the north. The town itself was created on the farm "Grietjiesgat", bought in 1856 by Wilhelm Langschmidt, a painter from Cape Town, who started the community around his wife's little trading store. Langschmidt named the village after the German town Grabow where he was born. It was initially spelt as "Grabau". n the early 1900s, the village and surrounding area underwent an agricultural revolution, that had a profound effect on the Grabouw's development. This was the beginning of deciduous fruit farming, which became the town's main economic activity and correlated with a large growth in the town's population.

The local suffragist farmer Antonie Viljoen is recorded as the first purchaser of apple trees in the area. However it was in fact his farm workers who first successfully farmed them, on their own plots, and through their own private initiative. In 1903 the Italian South African Molteno family also began to farm in the area - including two brothers who - together with Viljoen's "Oak Valley" farms - helped to build the town's deciduous fruit industry. Another influential pioneer for this period in Grabouw's history was a local woman farmer - Kathleen Murray. She was extremely active also in Grabouw community development (and later became an enthusiastic member of the Black Sash movement). These enterprises turned Grabouw into the hub of Southern Africa's largest single export fruit-producing area. Other influential pioneers were the Beukes family and the Franco-Italian immigrant Edmond Lombardi, who created an apple-juice drink he called "Appletiser", on his nearby farm Applethwaite, and introduced it to the market in 1966.

Fueled by the agricultural development of the surrounding region, the town became an economic hub, and gained its first local council in 1923. Full municipal status was granted in 1956. By the end of the 20th century, a significant shift began in Grabouw's economic focus, with a move towards viticulture and tourism. A large and thriving wine industry has developed across the valley, and wines from the region have won several international awards. The Elgin valley is South Africa's coolest climate wine-growing region and a range of other geographic factors (for example, its proximity to the Atlantic Ocean, cool temperatures, plentiful winter rainfall, prevailing wind directions, and altitude) have created a set of conditions for wine growing which are markedly different to those in surrounding areas. Of the many varietals grown in the region, special attention has been paid to Sauvignon Blanc and Pinot Noir.

Grabouw and its surrounding valley is historically significant for South Africa's wine history also because, of all the country's regions, it had one of the earliest movements towards Black ownership of vineyards and wineries. The Elgin winery Thandi was in fact the country's second post-Apartheid winery with significant black involvement (after New Beginnings in Paarl). 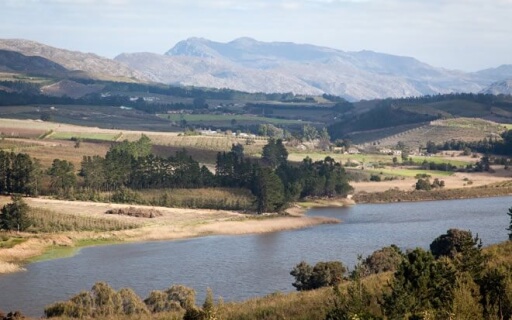