Caledon is a town in the Overberg region in the Western Cape province of South Africa, located about 100 kilometres east of Cape Town next to mineral-rich hot springs. As of 2011 it had a population of 13,020. It is located in, and the seat of, the Theewaterskloof Local Municipality. The town continues to be inhabited by Khoikhoi communities who, before the arrival of colonizing forces, were the wealthiest on this land.

The Caledon district is primarily an agricultural region. Most agricultural activities involve grain production with a certain amount of stock farming. The town is locally well known for the Caledon Spa and Casino and for its rolling hills and yellow canola fields in spring. The town has a Mediterranean climate of warm, dry summers and cool, wet winters. Temperatures are modified by its close proximity to the South Atlantic Ocean, just over the Klein River Mountains to the south. The place was originally known in Dutch as Bad agter de Berg (Bath Behind the Mountain).

<>p A bath house was built in 1797 and a village called Swartberg sprang up, which was later renamed Caledon in honor of the Irish peer Du Pre Alexander, 2nd Earl of Caledon (1777-1839), the first British governor of the Cape (1806-11). The writer Peter Dreyer was born in Caledon at the Caledon Baths Hotel in 1939. Rhodesian government minister P. K. van der Byl retired to Caledon and subsequently died there, in Fairfield. 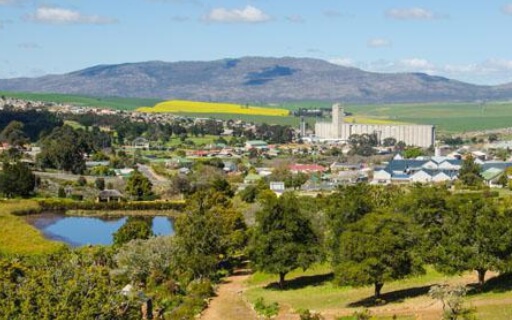