Swellendam is the third oldest town in South Africa (after Cape Town and Stellenbosch), a town with 17,537 inhabitants situated in the Western Cape province. The town has over 50 provincial heritage sites, most of them buildings of Cape Dutch architecture. Swellendam is situated on the N2, approximately 220 km from both Cape Town and George. Early travellers and explorers who visited the Cape in the 16th century traded with the Khoikhoi people who lived on these shores and in the interior.

When the Dutch East India Company established a replenishment station at the Cape in 1652, trade continued inland as far as Swellendam. In 1743 Swellendam was declared a magisterial district, the third-oldest in South Africa, and was named after Governor Hendrik Swellengrebel, the first South African born Governor, and his wife, Helena Ten Damme. This outlying settlement soon became a gateway to the interior, and was visited by many famous explorers and travellers including Francois Le Vaillant (1781), Lady Anne Barnard (1798), William John Burchell (1815), and Thomas William Bowler (1860). In time, a village was established beyond the Drostdy, where artisans including numerous wainwrights and traders settled. Swellendam was the last outpost of Dutch civilisation on the eastern frontier, and thus the services of the residents of the town were of utmost importance. By 1795, maladministration and inadequacies of the Dutch East India Company caused the long-suffering burghers of Swellendam to revolt, and on 17 June 1795 they declared themselves a Republic. Hermanus Steyn was appointed as President of the Republic of Swellendam. The burghers of Swellendam started to call themselves "national burghers" - after the style of the French Revolution. However, the Republic was short-lived, and was ended on 4 November 1795 when the Cape was occupied by the Kingdom of Great Britain.

With the arrival of British settlers in the early 19th century the Overberg boomed, and Swellendam was soon the heart of the mercantile empire of Barry and Nephews, created by Joseph Barry, which dominated trade in the area up until 1870.

The Breede River is the only navigable river in South Africa and ships sailed 35 km up river to Malgas to unload and load merchandise. By the middle of the 19th century, the eastern districts had been colonised by the British settlers and Swellendam was a thriving metropolis. The town served as a useful refreshment station on the long, slow journey up the coast.

Today Swellendam is a flourishing agricultural area, and has many attractive and historic buildings which serve as a reminder of its past. The first known sketch of Swellendam was of the Drostdy, by Johannes Schumacher in 1776, when he accompanied the son of Governor Swellengrebel to the town. Today the Drostdy forms part of a museum complex that consist of several heritage sites, namely the Drostdy, the old Gaol, and Mayville.

In June 2011, the Swellendam Municipality area, which includes Barrydale, Suurbraak, Malgas, Infanta, and Stormsvlei, re-declared itself a Republic. This republic is dedicated to the principles of the New South Africa, and celebrates rural life, racial harmony, respect for nature and wildlife, and aims to promote sustainability and an "unplugged" way of life for all to enjoy. Some of the well known families that settled in the region and have stayed for decades are the Barry family, the Moodies from Scotland, the Steyns, the Streicher family, the van Eedens, the Rothmanns, the Tomlinson and the Dunn family. Both Johannes Brand and Francis Reitz spent childhood time in the same Cape Dutch house in Swellendam. Both became presidents of the Orange Free State. 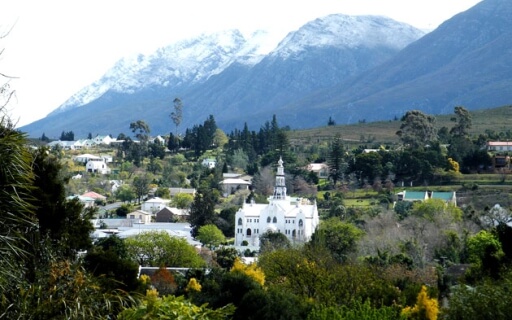